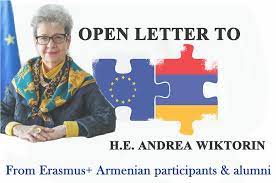 An Open Letter signed by 342 Armenian Erasmus+ alumni to the Ambassador of EU Delegation to Armenia H.E Andrea Wiktorin

On October 13, by the initiative of  Erasmus Mundus JMD students (2019-2021) Tatev Derzyan and Arman Azizyan, with editorial support from EMJMD alumna (2010-2012) Edith Soghomonyan, an Open Letter was sent on behalf of 342 Armenians to the Ambassador of the Delegation of EU to the Republic of Armenia H.E Andrea Wiktorin.

They appealed to the Ambassador Wiktorin as former or ongoing Armenian participants and alumni of the Erasmus+ Programme, whom the European Union has helped to access quality education (both formal and non-formal) аnd intercultural experience in different corners of Europe, an experience that has changed this community forever.

We have benefited from the freedom of movement that our region has been short of because of the conflicts and continued hostilities since the collapse of the Soviet Union. We have bonded with people from various national backgrounds, thus strengthening the European in our hearts. We have learned to cherish democracy and human rights and each of us has embarked on making a change in our homeland.

The letter also accentuates Armenia’s and Azerbaijan’s participations in the Eastern Partnership programme under the EU Neighborhood umbrella. EaP has promised to enlarge its partnership with the member countries based on the “more for more” principle and undersigned rely on this criterion as one of the bases of our appeal. In contrast to its bigger and wealthier neighbour Azerbaijan, since the Velvet Revolution of 2018 the Republic of Armenia has made substantial progress in regards to democratization and protection of human rights. According to the Freedom House, Armenia has improved its freedom score from 45 points (2017) to 53 (2020). Artsakh/NK, categorized as a partly free country, has also raised its score from 30 (2018) to 34 (2020). Meanwhile Azerbaijan, classified as a non-free country has the lowest and continuously decreasing score in the region, only 10 points.

Erasmus+ beneficiaries urged the Ambassador of the Delegation of the EU to the Republic of Armenia to advocate their message to the President of the European Commission Ursula von der Leyen in order to condemn the aggressors’ attempts of extermination of Armenian population of Artsakh/NK and apply appropriate measures against the pre-planned military actions of Azerbaijan and its associate Turkey.

You can read the full letter in Armenian and English in the pdf below.

UPDATE! In response to this Open Letter, on October 15, H.E Ambassador Wiktorin has sent back a letter to the Erasmus+ participants and alumni, which is available on the official Facebook page of the Delegation of EU to the Republic of Armenia through the following link.